We have one of those cushy toilet seats, with an embroidered lid, that's often found in the homes of the elderly.

Something nice and airy, and it deflates a with poof of air when sitting on it.

It's now purple-ish where eons of butt cheeks have sat. Saggy butt cheeks, taught butt cheeks, any and every butt cheek has sat on this cushy toilet seat, and a shadow of purple has been left behind.

After living in my house for over a year, I still don't really know what the embroidery is. I keep thinking birds...perhaps a peacock, but I will have to actually look at it. It's one of those things we want to replace, but just haven't gotten around to it.

Now, this was at the eighth month point of living in the house. We had definitely spent some time in the house, used that toilet 100+ times and the water was always clear after a good flushing. 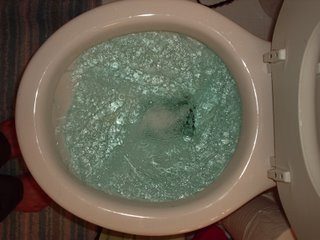 Then on a normal, everday-type of day, after using the cushioned toilet, it was flushed and out of nowhere blue water started to pour into the bowl.

Blue water. The color of blue man shower gel that smells like "the ocean." It was a color of water we weren't accustomed to seeing.

Like the Blue Man Group was hiding in the tank.

What is that? We asked. Why now? Where is it coming from?

Blue water doesn't appear unless you put a disk in the tank that spurts out blue cleanness. Blue doesn't happen unless you squirt some Lysol toilet cleaner in the bowl while its entrails of chemical dye the water blue, cleaning nasty pooh-water-stains off of the toilet bowl walls.

We opened up the tank and lo and behold, there was an ancient toilet bowl cleaner that just awoke from hibernation and began cleaning the toilet again. 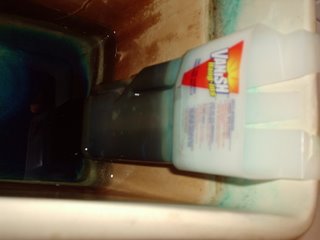 Somehow this Vanish stopped working for many months, perhaps years, and we woke it up again.

After about a week or two of blue flushes, it vanished.

But something has awakened it again.