Guess Who Came Without Warning? Phillipe!

Two puppies (one medium, the other super-sized) + A small house + No carpet + Shedding=

The answer to this equation is a little creature we named Phillipe (pronounced fill-leap, say it with a French accent).

When it was just Nigra, the Sheltie, she would have her good and bad days when it came to shedding. The cream hairs would drift along the wood floors whenever their was a breeze sent from a passer-by, a broom, a fart or a sneeze. In some corners of the house, since the carpet was ripped out in shreds, little hairs begin to congregate like a bad clique in the hallways of a high school. Every hair wants to be a part of it. 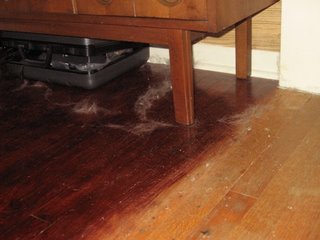 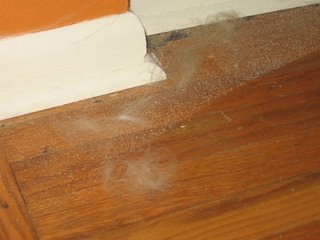 Weekly, the Swiffer will come out in a turquiose blaze and Swiff up every last tangle of Nigra hair. Some days the clumps where larger than a teacup Poodle and we kept asking Nigra, "Why do you keep inviting Phillipe over?"

She cocks her head, "Phillipe is my friend."

"You need to ask us when you want to have friends over..."

Then Raible came into the picture January 20th. Raible, who is half Collie, half Golden Retriever, didn't start shedding her undercoat until this late summer.

With both Nigra and Raible in the midst of shedding, Phillipe isn't so little anymore. Phillipe is the size of Nigra. Phillipe has a plan to take over. Phillipe won't stop until everything is bushy like it. 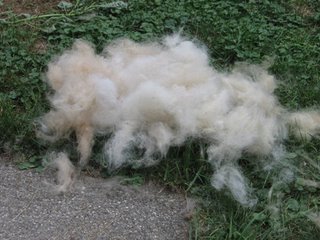 Weekly brushings of both Nigra and Raible create a mound of fur. A mound, mind you, consists of enough fur to stuff a pillow. Sadly, since it is dog hair, the cushiness of the pillow would not last long. A pillow stuffed with dog hair would easily become matted. We were on the verge of becoming big pillow makers, something very Summer from HGTV's "Design On a Dime," but nobody is going to buy into the craze of matted dog-hair pillows. Even if they are French and from the premiere International name of Phillipe.
Labels: the girls