In Rememberance of Rudee

I dated this girl in high school that once said, "cats are better than dogs because dogs don't have any personality."

She had dog breath and was closed-minded. She never met Rudee.

I met Rudee when I was ten years old...15 years ago. He was a fit, black poodle (that slowly turned a silverish gray). He was also the largest of the three dogs that my parents owned, which isn't saying much. He was about a foot-long. The other two? Smaller.

People flip when they hear the world "poodle" because of all the assanine poodle breeders out there that create them into these majestic show dogs. Rudee was a poodle by breed and by breed only. His hair wasn't long and pulled back into a fabulous pony tail like some awful drag queen. He didn't have plooms of hair in perfect circles. He wasn't some confused, female-male-it-dog, regardless of his un-neutered boy-parts: the dog-version of the castrati. 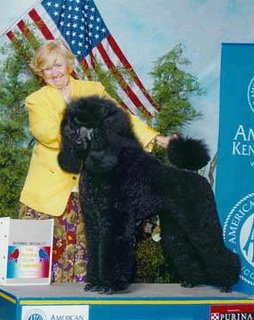 No, my brother and I freaked and made sure the scissors never made Rudee, or the other poodles my parents owned, look like queens.

Instead, Rudee had a simple cut that showed off his black curls mixed with his silver curls. His ears were a little crimped and poofy at times, but damn the humidity!

He was a limber pup that went on walks every morning. My mom was a walking-Nazi. The four dogs (three poodles and a yorkshire terrier) would bemoan getting up so early, but up they went, tangled in four leashes, leading my mom down the sidewalk of the neighborhood.

Sometimes mom would stop and pick one of them up as they got older, since they couldn't keep up. But Rudee, up until a few months ago, was never one to quit. He was a trooper. He was also the wallflower out of the four dogs my parents owned. A dog's personality is very different from a cat's, I will agree, but aside from what Dog Breath said above, dogs can sometimes have more personality than people.

If Rudee were human, I would've seen him as a judge. A dog of quiet honor. Never quick to bite -- except for the one time a chicken bone landed on the floor (which can splinter and choke dogs) and I got it away from Rudee without, first, his teeth puncturing my pinky finger all the way through. He laid on his pillow by the TV, and in his hay-day, he could dance, roll over, and say "yes, please."

He could even say the first part of his name: "Aroooo...Arooo rooo rooo..." He rolled his R's nicely.

When he was younger, the first footsteps in the morning when my brother and I lived at home, were always my mom's. He knew that sound and that's when his howling began to drive us all insane. "Arooo...arooo rooo," and so on, until someone finally just let him out of the cage. After all the "shut up!" and "be quiet!" and so on.

Rudee examplified the term "good dog." He was a quiet guy that did his own thing and often enough blended into the scenery where he was hardly noticeable. Then, he appeared out of nowhere, got under your feet, you'd step on him, trip, he'd yelp and you'd just scream at him, "RUDEE!"

He was fit and able to walk, up until a few months ago, when my mom would leave him in his cage. One day he couldn't walk. He struggled. He was already partially deaf and his cataracs made it difficult for him to see, but he pushed on. Mom took him to the vet she works at. A shot of cortazone later, and he was walking better in no time. The talk of "putting him to sleep" subsided and Rudee was going to be around for a while longer.

Until this morning, while mom was at Jazzercise (mom was always the dogs' favorite) and Rudee was outside with my brother and sister-in-law's dogs, one of them started to bark and wouldn't stop. With all the fiasco, Rudee suffered a siezure and passed along in the backyard...a yard that, even though it was mostly deck with two small patches of grass (mostly dead from all the dog pee), he spent the better part of 12 years back there.

He'll be buried under the pine trees in the corner of the yard, in a place he knew best, among the bird feeders and squirrels.

Rudee, to me, was a little brother. A person in dog's clothing. We will all miss him.

He lived a long poodly life, especially at 105 in dog years. Here's to you Rudee: 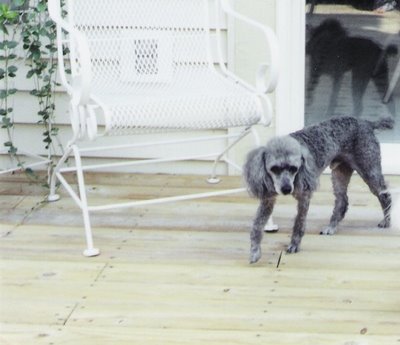