She began as a statue with so much promise, but she became a heroine addict.

Long before she was introduced to the "magic vein juice" by a neighborhood gnome, she kept the garden alive with beauty. Sunflowers, vegetables, perennials -- all these were humbled by her white aura of perfect beauty. Her skin, flawless. Her gaze was always down; although she had such power, she was never one to be abusive with it...the flowers were humbled by her and she, too, was humble. 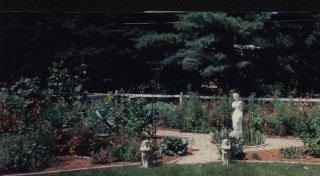 Then her skin started to crack and peel. The translucent white became weathered, beaten and broken. The white turned gray. Her beauty deteriorated, as did the garden. Grass replaced beautiful flowers and wildflowers replaced the vegetables. Her self-love disappeared and she fell into a deep pit of black dispair.
Once a wonder in all the adjoining backyards, Olay could not save her face. The gnome told her how she could feel better...

And that was her downfall:

A crack addict without arms. Granted, that's where addicts inject the drug -- obviously. How did she get it? The gnome was her supplier. Well, not just the supplier, but he also injected it into her through her open belly button. She paid him via peepshow. She became such an avid user that she just decided to keep her toga off.

Really, she had such promise, but she became such a slut in our backyard. She needed to be stopped. She caused the weeds, her putrid essense fed their growth.
Labels: backyard mythology