Venus Died, But Love Has Not 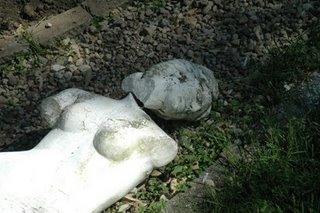 When we bought the house, a year ago next Wednesday (May 31st), we came across pieces of decor that were reminiscent of the horror film "House of Wax." These statues, if there was a horror film, and one day as I continue to write perhaps there will be, the new horror film will be "House of Solid-Cement."

As gifts, I assume, from the previous home owner, we received three statues made of pure solid concrete. Each one heavy. Each one hideous. They do not make the backyard a Grecian Garden.

In the backyard we have statues of Venus, Zeus and Hera...Ok, so I'm mixing Roman and Greek mythology, but overall, they are as tall as a short woman (or man) standing approximately 5'1".

Hera and Zeus gaurd a beautiful burgundy and green bush (I do not know the name) while Venus used to be encircled by awful plants. The plants were so awful, that we had to dig up the dirt and remove the pods before the alien Tommyknockers came. And although many people grew accustomed to seeing Venus standing in the sunshine, half-naked and armless, she had to go.

Steph pushed her over, and Venus hit the ground breaking her neck. Venus died. Soon we will take a sledge hammer to her dirty, white, hard flesh and break her into pieces.

Pete said we could borrow his granddaddy's chisel and hammer, along with a sledge hammer, to ruin the little pieces of Greek Heaven that are really a pain in the ass. Each statue is so heavy that we will need to sacrafice each one to some new god, perhaps Xeno the alien from Scientology, in bits and pieces so our garbage company can pick them up.

And while Venus, the goddess of love in Roman lore, is symbolic of love -- we've taken on a better meaning of love: perennials that are going to be beautiful.

Xenu, take these gods and goddesses away.
Labels: backyard mythology